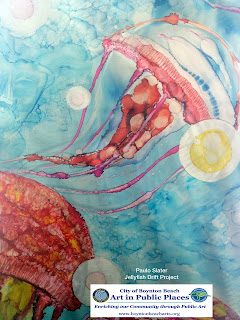 Read more about the project.....

Jellyfish sculpture to be set adrift off Ocean Ridge


$300 piece could turn up as far away as England, artist says

Paul Slater stepped over the litter at Riviera Beach in December and had an idea: Instead of trash drifting to shore, "wouldn't it be cool if it was a piece of artwork that washed up instead?"
Somewhere along the Eastern Seaboard, that's going to happen, says Slater, a Palm Beach County artist. After he drops his brushed-metal sculpture into the sea July 7, the Gulf Stream will pull it north for a distant beachgoer to find.
"I really wanted somebody to get excited about finding a piece of artwork on the beach, like I was," he said.


Slater, 34, is a bearded Lake Park resident whose trademark jellyfish pieces have become a common sight in Boynton Beach. They've been exhibited in City Hall and local gallery exhibitions, and Commissioner Marlene Ross has one of his works in her home.
Now his art will go on a nautical tour.
"There's a possibility it will reach England," Slater said.
The Gulf Stream, a warm ocean current from the Gulf of Mexico, comes within nine miles of the South Florida coast each summer. It continues toward Canada and eventually crosses to the British isles.
With good weather on July 7, Slater and an entourage of paddlers and boaters will head out from Oceanfront Park in Ocean Ridge. Halfway into the Gulf Stream, they plan to release the sculpture, a shoulder-high aluminum plate bolted to a bamboo cross.
"Plastic bags in the ocean look like floating jellyfish," said Debby Coles-Dobay, the Boynton Beach public art administrator who helped publicize the project, which seeks to raise awareness of the environmental impact of litter.
Slater creates his metal art by brushing grooves into the surface. Then he applies watercolor paint that seeps into the grooves for an aquatic look. In this case, he drew a green jellyfish on blue sea. On the back, an engraving will explain the drift-art project to the person who finds it.
"Of all my compositions, I liked it the least," said Slater, explaining why he was willing to let the $300 artwork go. "The ocean will make it more interesting."
Such projects aren't unheard of. In October, an eight-foot-tall fiberglass Lego man washed onto a Sarasota beach in a drift-art project apparently created by a Dutch gallery. The county sheriff collected it to see if anyone would claim it but didn't seek any littering fines.
Slater said the inspiration for his project was his own. He has a passion for environmental protection, having studied sustainable development, and he appreciates community art.
On the side, Slater builds bicycles and pushes volunteerism through BicycleXchange, the nonprofit he founded. Encouraging people to hit the beaches is part of why he's launching art into the abyss, he said.
"He's a very big community leader as far as recycling and bicycling is concerned," said Rolando Chang Barrero, a Boynton Beachgallery director who has shown Slater's work.
Slater wants to put a GPS system on his piece, but only for curiosity's sake. He doesn't want it back. Whoever finds it — in Georgia or North Carolina or England — gets to keep it.
bwolford@tribune.com or 561-243-6602 or Twitter @benwolford