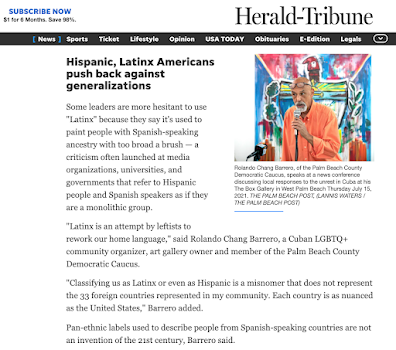 It's a word for those 'at the intersection of Latin American and queer,' one advocate says

Some leaders are more hesitant to use "Latinx" because they say it's used to paint people with Spanish-speaking ancestry with too broad a brush — a criticism often launched at media organizations, universities, and governments that refer to Hispanic people and Spanish speakers as if they are a monolithic group.

"Classifying us as Latinx or even as Hispanic is a misnomer that does not represent the 33 foreign countries represented in my community. Each country is as nuanced as the United States," Barrero added.

Pan-ethnic labels used to describe people from Spanish-speaking countries are not an invention of the 21st century, Barrero said.

The 1980 U.S. Census was the first decennial count to ask respondents if they were "Hispanic." Previously, the Census attempted to quantify people by asking if they had Spanish surnames or whether they spoke Spanish at home.

In 2020, the Census asked respondents whether they were of "Hispanic, Latino or Spanish origin." The question included a space to specify a person's country of ethnic origin.

Barrero said the introduction of umbrella terms like Hispanic and Latinx lead to generalizations about people who hail from Spanish-speaking countries instead of a greater understanding of their cultures and traditions.

"They’re using the word like 'the Hispanic market' and '(the) Hispanic voting block.' That has caused a lot of interference in understanding who we are as a people," Barrero said. "We share a language, but that’s where it begins and where it ends."

Barrero, a gay person who uses both he/him and ze/zir pronouns, said while he takes issue with non-Hispanic people using Latinx to describe many communities all together, people who are Hispanic and nonbinary or transgender should feel supported when they use it.

"I completely respect someone's pronouns and their identity, but we should not (all) fall under that label." Barrero said. "We have many nuanced people in our community and that hasn't reached the mainstream."

Barrero and others are pushing for an understanding of "intersectionality" — a respect for all of a person's identities when considering their life experience  — in Hispanic and Latin American communities.

Posted by Rolando Chang Barrero at 9:26 AM