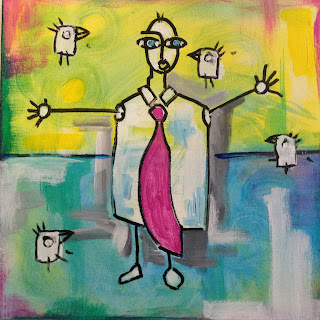 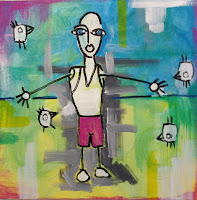 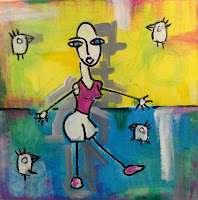 Special thanks to Amanda Linton and Colleen Dougher!

This Saturday! It's all about Art Rock!

by Colleen Dougher, Correspondent
11:22 a.m. EDT, April 25, 2013
Art Rock, a cash-and-carry art show in West Palm Beach, may not be the best place to find a landscape painting to hang over the couch. But for those people who would appreciate a portrait of a bunny with antlers, a T-shirt that depicts a roaring lion riding a bicycle or knitted cupcakes, it's a fine way to spend an afternoon.
Now in its fourth year, Art Rock is one of several events juggled by Amanda Linton, who, along with her husband, JR Linton, owns the West Palm Beach tattoo parlor and art gallery Ink and Pistons..
Linton's art-fair career began with the 2007 launch of Stitch Rock, an indie craft fair that has spawned events such as the monthly Downtown Open Market and annual fairs such as the vintage-oriented Retro Indie Market and Art Rock. As the name of this last event suggests, it's all about art.
"There are a few handmade vendors, too," Linton says. "But I usually try to have people who blur that line between craft and art."
This year's lineup includes Calan Ree, creator of a weekly web comic about "a gingerbread boy, his odd, silent, skeletal girlfriend and the sister who wants him dead"; Freckled Purl, who crochets and knits objects designed to prompt smiles; and Rolando Chang Barrero, a painter and the owner of ActivistArtistA Gallery.
Barrero, who first participated in Art Rock last year, says he traded works with other artists, enjoyed treats and made money. "I sold over eight pieces and got a commission by a designer for a private client," he recalls. This year, he's back with new works, including his $175 acrylic-on-canvas titled "Man With Flamingo Tie."

"We have 60 vendors this year," Linton says. "I would like to say that half of those are new, which I'm excited [about]."
Among the newbies is Robert Jimenez, a.k.a. ZeroStreet, whose offerings include tiki mugs, pendants, paintings and 8x10 prints of "Bride," which depicts the frequently drawn and painted image of Elsa Lanchester as the Bride of Frankenstein. "It's one of the many enduring images from my childhood that informs my work," the artist says. "I hadn't ever drawn her before this piece."
Jimenez typically participates in specialty shows such as the Hukilau and Florida Supercon, but hopes to add Art Rock, which a friend recommended, to his rotation.
Art Rock will take place noon-6 p.m. Saturday, April 27, at Armory Art Center, 1700 Parker Ave., in West Palm Beach. Admission is $5, free for kids 12 and under with adult. Call 561-832-1776 or go to ArtRockRocks.com.
Colleen Dougher operates the South Florida arts blog Arterpillar.
Copyright © 2013, SouthFlorida.com
Posted by Rolando Chang Barrero at 6:54 AM