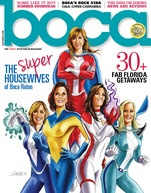 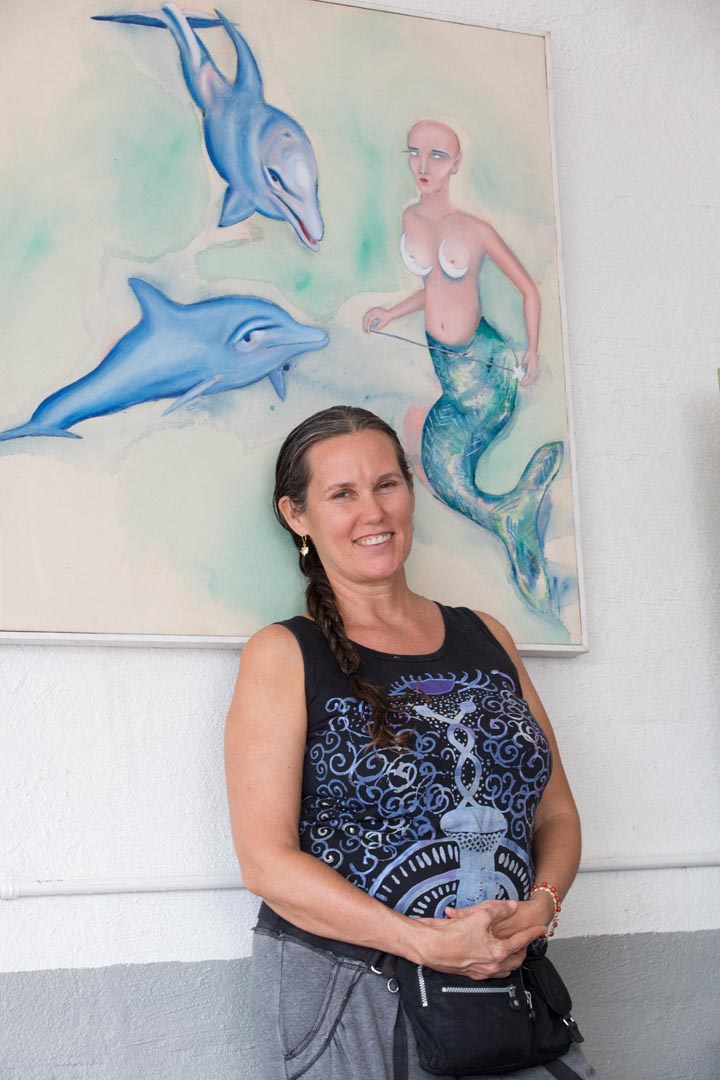 Nancy Nolen
The art: Nancy Nolen brings a ray of sunshine and surrealist, kumbaya whimsy to the Boynton Beach Arts District. Half-moons, half-naked mermaids and fully formed snakes appear with frequency and symbolic resonance in her acrylic paintings. “I generally paint from my imagination, but with snakes, they represent water on land,” Nolen says. “The most ancient expression comes from the sea. It has ancient memories.”
To that end, she’s been broadening her palette from traditional canvases to wooden paddles and pieces of gnarled driftwood, working with their rough edges and painting around and on their imperfections. “First, nature went ahead and began, and I went with that impulse,” she says. “I really feel like I’m co-creating with nature. The more I do it, the more I want to do it.”
The back story: Nolen practically painted while she was in the womb; some of her earliest memories are art-related. Simply put, “My soul just said do it,” she says. “I have memories of first grade, doing papier-maiche or something and thinking it’s a cool way to spend time.” These days, she sells T-shirts bearing images of some of her signature paintings, and the bongo drums in the center of her studio suggest one of her other creative outlets: When she’s not painting, she creates music, dances and teaches yoga.
Career highlight: A life-size mermaid portrait she painted on commission for a Boca Raton collector.
Area in which the Palm Beach County art scene could improve: “More artist co-ops, as far as living situations. That’s for sure. Creativity should be everywhere.”

Michael Kupillas
The art: From ethereal miasmas of red and black globules to an image of New Orleans’ Superdome in the aftermath of Hurricane Katrina, Michael Kupillas’ oil paintings dabble proficiently in both abstract and representational styles. His best works conjure both worlds, with abstracts feigning figural imagery and the realistic pieces feeling slightly abstracted. Those compelling red-and-black abstracts, for instance, invariably suggest topographical close-ups, thermal imagery, our circulatory system and even the parabolic shape of an airplane pillow.
He’s also found inspiration in aquatic surrealism, capturing images of complex underwater colonies rife with unusual marine life, and waves crashing against beaches near rolling hills. The pieces are known for their dedicated attention to detail, for drawing audiences into the big picture and then surprising them with the small stuff.
“I love the idea of fantastic creatures,” he says. “These aren’t straight animal studies; I try to play around and have different elements. The detail is part of the overall experience. I like people to look at a piece and go, ‘that’s really beautiful,’ and then have the detail draw them in. And that way, when you step back a little bit, you have a fuller appreciation of what goes into the piece.”
The back story: Kupillas began making art as a teenager, specializing in airbrush and acrylics. Like Warhol, he started as a commercial artist, working on car drawings for an advertising company. The work was too graphically bound, and he found the drawings “very mechanical.” He describes his progression toward an organic aesthetic as much more artistically fulfilling.
Career highlight: Owning the now-defunct Village Studio and Gallery in Delray Beach. “We opened in 2010, and we just closed this year. It was a cop-op type of thing, but it wasn’t a pay-to-show situation. Over two years, I had 300-some artists appear there, and we did live music. I was working with a lot of nascent artists, and that was basically the whole motivation behind doing it. I’ve always sold stuff, but doing it as your main business, on Atlantic Avenue in Delray, it’s very tough.”

Posted by Rolando Chang Barrero at 5:11 AM