Extra Extra! Read all about it in Today's Sunday Sun Sentinel! 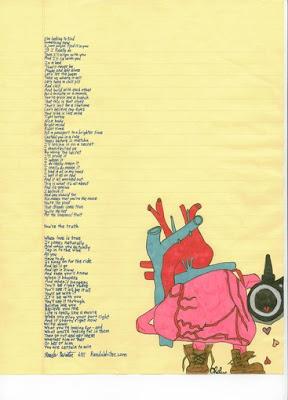 Image: By Renda Writer in collaboration with Cierra Robinson (Courtesy/August 17, 2012)

'Writing's on the Wall' exhibit

Known for campain to get on Ellen show, artist opening 'Writing's on the Wall' exhibit
Words will be everywhere when "The Writing's on the Wall" — Renda Writer's solo exhibition of handwritten art — opens Aug. 23 at ActivistArtistA Gallery, a 350-foot warehouse-turned-art venue in theBoynton Beach Arts District.
The exhibition has been promoted as having "a billion words on display." While Writer admittedly takes poetic license with that claim, he estimates the show contains at least a few million words, most written one after another in blue ink on yellow legal paper. Go ahead. Count them.
He's been writing in notebooks since 2000. That's when the University of Florida finance graduate began selling comedy tickets on the streets of New York and jotting down "wannabe rap lyrics" while sitting in restaurants or subway stations. In 2003, he returned home to South Florida with plans to record an experimental poetry CD, but within months crashed his car and began working at LaSpada's, aCoral Springs hoagie shop.
In need of a creative outlet, he searched for an open mike and, after finding only one, created his own and then another and another.

By late 2007, he was hosting open mikes almost every night, working as chief editor of WeMerge, the local arts and entertainment publication he co-founded, and launching what would become a years-long campaign to read his poem "Half Hearted" on "The Ellen DeGeneres Show."
His efforts included a petition drive and creation of two Ellen Art Shows, which featured portraits of the comedian and talk showhost. While Writer has yet to perform his poem, his most recent Ellen Art Show, held in Los Angeles in January, resulted in a mention from DeGeneres on-air.
Last August, Writer resigned from WeMerge to devote more time to his art, a journey that led him to the notebooks he's been pouring poetry, thoughts, stories, lists, ideas and stream-of-consciousness ramblings into for 12 years. As he notes in the flier for his show: "The notebooks have always stayed with me."
Since 2000, he's dreamed of a solo exhibition in which he could display them as art. "The Writing's on the Wall" is the realization of that dream, and hopefully a move closer to the dream of making a living as an artist.
"The life of the artist is tough," reveals Writer, who is again working at a LaSpada's. "It's easy to get fame, to be well-known around here, but it's hard to make money off your art, and I am trying to do that with this show. I want to finally monetize what people think is cool...
"What's even cooler than that is that it's just stuff I'm getting off my chest. It's like walking into my brain when you walk into this gallery."
There's a lot of personal information in there, and Writer is becoming more comfortable with releasing it.
"I wrote stuff recently that's pretty damn personal, but I can't hold it back because it sounds kinda cool," he explains.
He's also experimenting with how he displays the writings and incorporating his words into assemblages, collaborations, installations and jewelry. Expect to see words across 15-foot paper ribbons and on two-sided pendants, the screen of a found computer monitor and bread boxes.
"At my job, we serve giant party hoagies and when the baker gives us the bread it comes in a big cardboard box that's 6 feet long. ... It lends itself perfectly to poetry."
In addition to his own work, Writer's exhibition contains collaborations with 15 artists who created images to accompany his words. The roster includes Justin Invi Vilonna, Jeff "Dekal" Becker, Gina Bentivegna and Chan Shepherd. Works will be priced from $1 for corkboard pieces to as much as $1,500 for a 20-by-30-inch board he wrote in Sharpie over an intense seven-hour period outside a taco stand.
As anyone familiar with Writer's years-long campaign to get on "The Ellen DeGeneres Show" can attest, the artist is determined. He's already established a site for the third annual Ellen Art Show he's organizing in January.
Colleen Dougher operates the South Florida arts blog Arterpillar.

For More information visit ActivistArtistA.Bolgspot.com
Posted by Rolando Chang Barrero at 5:39 AM