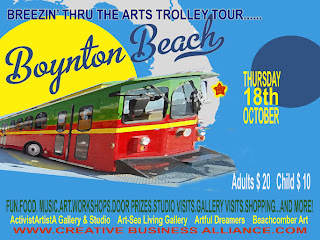 Trolley Tour!
Brezzin' Thru the Arts!

Get to know us!

Thank you Mary Kate Leming, Ron Hayes and the staff of The Coastal Star Newspaper!

BOYNTON BEACH —Shortly after 5 p.m. on July 19, a Molly’s Trolley carrying about 35 enthusiastic men and women left Cuthill’s Backyard restaurant on Northeast Fourth Street and went in search of art.

Participants ride the trolley from one arts venue to the next.
They found it where you’d expect to find art — colorful galleries in a shopping plaza, tiny strip malls along Federal Highway.
And then they found it where you’d least expect art — an industrial district off Boynton Beach Boulevard, just west of I-95, just north of Lloyd’s Auto and Wendy’s burgers.
In row after row of concrete bays built to house heavy equipment and light construction, painters, sculptors and graffiti artists are constructing a creative community. The bays are filled with paintings and macramé, metal sculptures and stone carvings, some in progress, some for sale.
You can’t miss the artists’ bays. The once-gray metal doors are now bright murals, bursts of color in a formerly dangerous neighborhood.
“This is fantastic,” marveled Kim Weiss as she strolled from bay to bay, “I’ve lived by the beach for about four years, and all I knew is the more local galleries. But here, I could be in Miami or New York and I wouldn’t know the difference. It’s very high-end art. It feels very urban here.”
It feels like a secret the trolley tours hope to expose.
Dubbed “Breezing Through The Arts,” tours are slated the third Thursday of each month beginning in October. For $20, travelers visit local galleries, enjoy a bit of wine and cheese, and meet the artists. The city’s Community Redevelopment Agency and the Creative Business Alliance, a new consortium of local artists and gallery owners, sponsor the program.

Sporting a custom-painted hat, Lori Durante provides information during the tour.
“It’s coming from artists who are vested here with their own galleries,” said Lori Durante, the executive director of the Museum of Lifestyle & Fashion History, who led the first tour. “This is a seed they’ve planted, and they’re nurturing their field for an artful harvest.”
Among the galleries highlighted on the inaugural tour were Art-Sea Living, Beachcomber Art, Artful Dreamer’s Studio, ActivistArtistA Gallery and Tortoise Treasures.
At Beachcomber Art at 112 S. Federal Highway, a singer, balloon sculptor and psychic entertained as visitors perused owner Debbie Brookes’ amazing selection of chandeliers, mirrors and stuffed fish, all covered with seashells.
“This is my play therapy,” Brookes explained.” I’m an embellisher in many ways.”
She began by embellishing boxes with shells and selling them to friends in the Ocean Ridge Garden Club, which  led her to place them in boutiques. When she saw the markup, Brookes opened her own shop, where a sailfish covered with shells ($5,200) hangs from the ceiling, not far from a shark ($5,500).
Lamps, busts, obelisks and vases, Brookes embellishes them all. She even has a cocktail table covered with oyster shells ($3,200), some with pearls.
“You need the whimsy,” she explained.

The undisputed highlight of the tour, however, was the burgeoning arts district on West Industrial Avenue, where Rolando Chang Barrero is leading the renaissance.

The area’s artistic beginnings came in 1986, when metal sculptor Rick Beaulieu moved into what was then a crime-ridden neighborhood. Three years later, the city pronounced the stretch a “Neighborhood Arts District.”
A Miami native who came to Boynton Beach a year ago, Chang Barrero opened his Activist-ArtistA Gallery in one of the bays, then sought other artists willing to pay about $450 a month to move in. Now nine artists are working there, and three have galleries.
“People are surprised to find that there’s even an arts district in Boynton Beach,” says Chang Barrero. “It’s always been on the down-low, but now, with the upswing and marketing, we’re trying to put Boynton Beach on the map.”

For information about the next Breezing Through The Arts trolley tour on Oct. 18, call 737-2600 or visitwww.creativebusinessalliance.com.