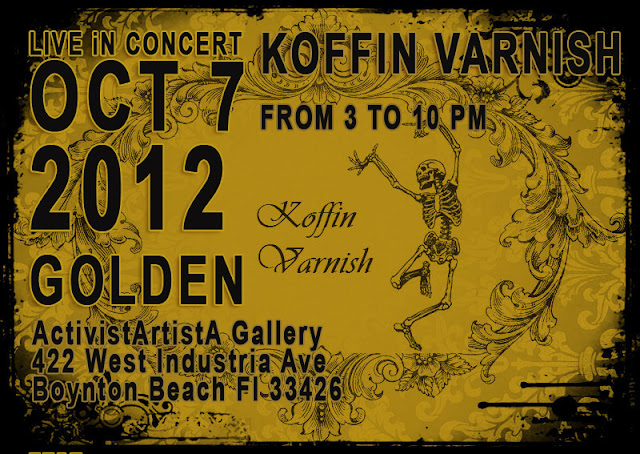 Marvin Ray Hawkins has been playing music all over the country with various bands since the 80's. His ability to excel on various instruments has made him a reliable working musician for years. Recently he has played with Slip & the Spinouts (Drums), Loxahatchee Sinners Union (Upright bass), Nightly Death Shade (Slide guitar), Diablo Dimes (Drums), Steven Jude Band (Keys), South of Georgia (Lead guitar), etc.... His current side project is a duo called Koffin Varnish. The band formed in May 2012. He fronts the band and sings while playing incredible solos on the upright bass while Michele Woofter from the band Loxahatchee Sinners Union (Accordion), & Nightly Death Shade (Synth keyboards) plays a Fender Rhodes. Together the two perform a tight and appeasing original set. Their originality and professionalism has landed them gigs from opening up for National acts at Revolution & the Ft. Lauderdale International Film festival. You would be lucky to have them play at your establishment. Within days of their new project announcement, they landed shows at the premier clubs in South Florida that feature original music such as the Poorhouse, Propaganda, & The Native FL Taproom. Koffin Varnish is currently recording & will release their music soon. Although they are a duo now, they have hopes to grow as a full band. In the mean time these two will entertain you & audiences none the less!

For More information visit ActivistArtistA.Blogspot.com
Posted by Rolando Chang Barrero at 11:49 AM