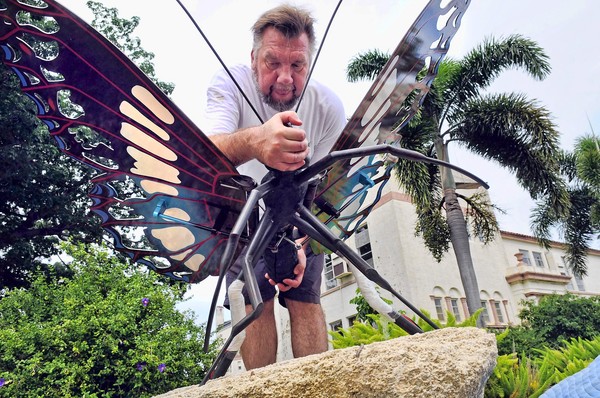 BOYNTON BEACH—
— When the sun comes out, Rein Triefeldt's solar-powered butterfly sculpture makes a whirring noise and flaps its wings
"It sounds more like a mosquito than a butterfly," said Triefeldt, a New Jersey artist in town to install "Solar Butterfly." (It can be yours for $50,000.)
The piece is one of 15 moving public sculptures that are part of an outdoor kinetic art exhibit. Boynton Beach is hosting the 2013 International Kinetic Art Exhibit & Symposium, and artists from South Florida and around the world are making preparations for the Feb. 8-10 culmination of the event.
City leaders have been bragging for months that the symposium is being held here, in Boynton Beach, and not, say, West Palm Beach or Delray Beach.
"It's the first of its kind in the country," said painter Rolando Chang Barrero, director of a Boynton Beach gallery.
The interesting thing about a kinetic sculpture, say connoisseurs, is the way the artist builds the passing of time into the piece. Viewers are drawn to a fourth dimension. They want to know how it works.
And it's a less esoteric branch of art than one might think. There's actually an association of more than 1,000 artists from 60 countries, said Ralf Gschwend, co-founder, with Triefeldt, of the Kinetic Art Organization, as the group is known.
Gschwend, 53, who is Swiss and goes by Ralfonso, founded the KAO in 2001 with two other kinetic artists. Since then they've coordinated exhibits in Holland, Italy, Russia, China and, of course, New Jersey.
"Now we are thrilled to work with Debby" — Debby Coles-Dobay, Boynton's public art administrator — "to make the first Boynton Beach Kinetic Art Exhibition & Symposium a success," Gschwend said by email from Europe.
The symposium in February is the main event, where artists will talk about their work and host seminars. But meanwhile, organizers are trying to build anticipation. "More is coming, more is coming," Coles-Dobay said.
They're starting with installations such as Triefeldt's. He likes to incorporate sustainable energy into his art — his butterfly at East Ocean Avenue and Seacrest Boulevard, for example.
"There's always art for art's sake that's strictly aesthetic, but there has been a lot of discussion about kinetic art because of the green movement," Chang Barrero said.
Gschwend's piece "Dance With the Wind" is a nine-foot, stainless-steel take on a wind chime, a variation of which was commissioned on a larger scale for the Beijing Olympics in 2008. It will sit across the street from the butterfly. (And it can be yours for $75,000.)
Other works include spinning disks on a steel and aluminum scaffold ($40,000), 300 pounds worth of balancing metal arms ($32,500) and something called "Geometric Stratum" ($25,000), which is more or less what it sounds like: a cluster of geometric shapes.
"The whole idea is to get people excited," Coles-Dobay said.
bwolford@tribune.com or 561-243-6602 or Twitter @benwolford