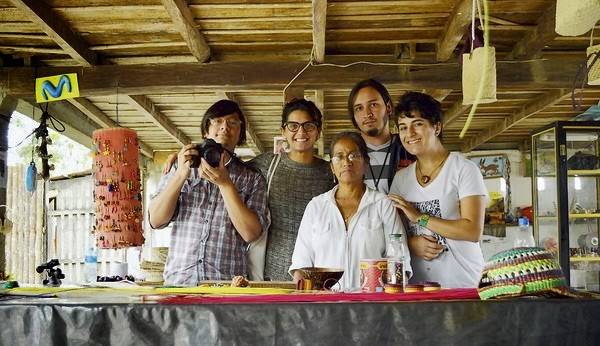 To Ecuador and back:

What to do when you graduate college with a degree in art or art history? Well, if you're students Nathalie Alfonso, Sofia Bastidas, Andres Ramirez and Edison Peñafiel, you will create a Kickstarter campaign to raise funds to sojourn to La Factoria, an established art residency in Vilcabamba, Ecuador.
Once there, you will set out to confront undiscovered places, uncontrolled emotions, unseeing reactions and use these experiences to translate them into a new artistic vision.


That vision, (Un)Common: Traces, will be unveiled at an opening Friday at Rolando Chang Barrero's ActivistArtistA Gallery, at the Boynton Beach Arts District.


Barrero was an early supporter of the project, having a fundraiser and exhibition titled, "Paper Plane," to raise money for their trip and their Kickstarter campaign yielded $4,500 for their travels to Ecuador.
"Their works highlight the impact of four artists who journeyed toward their past; akin more to time travelers tracing their ancestral culture heritage, than to the tourist/voyeur documenting the spectacle of a different culture," he said.

Bastidas said, "As an artist, art historian and curator I find fascinating the interrelation one can develop with art while traveling, but also establishing a home, a base where all this knowledge can pass on."
With that philosophy in mind, she created a gallery space in her home called Dwelling Projects. It's a space to show the work of visual artists outside the gallery venue and focus on new and emerging artists.
"We want to dwell in new spaces, develop and create awareness in the visual arts as well as expose ourselves to new experiences," Bastidas said.
In Ecuador the four students learned to work with local artisans using local materials such as tagua seeds, which come from the Ecuadorean ivory palm and are used to make jewelry and paja toquilla, the native straw palm that is used to weave traditional Panama hats, most of which are made in Ecuador.
Ramirez, 22, calls himself a photographer, but doesn't limit himself to portraits or landscapes. Rather, he incorporates photography into video and large-scale installations.
"Photography is my medium but I combine all the tools I can into my projects," he said.
He found it inspiring to meet the local campesinos and, despite being depicted as poor, he said, "They may not have material items, but they are rich in their cultural heritage. I was so happy to be with them."
"We were exposed to their art – what we might call handicrafts – but art is a subjective term. They make beautiful bracelets and keychains with techniques that have been handed down through the generations," Ramirez said.
"I want to show that one artist can make a difference and inspire me," he wrote on his Kickstarter page, "but 10 strong, ambitious and inspiring and open artists can change a community. It is something that we need in South Florida."
"Going to Ecuador to create art and bring it back here to present to galleries as exhibitions, critiques, dialogues and workshops is only the beginning," Ramirez said.
The Dwelling Projects in (Un) Common:Traces exhibition continues through Oct. 25 with an opening reception set for 7 p.m. Friday at the ActivistArtistA Gallery, 422 W. Industrial Ave. Call 786-521-1199 or email ActivistArtistA@Gmail.com.

BBAD celebrates its second anniversary with a
Golden Anniversary Party Weekend Oct. 11 to 13
with a full lineup of music, art and dance.
For a full schedule, visit: http://activistartista.blogspot.com/2013/09/golden-anniversary-party-weekend-at.html.

Posted by Rolando Chang Barrero at 9:27 AM