Letters to SunSentinel says, "..they should be commended for their initiative and creativity" 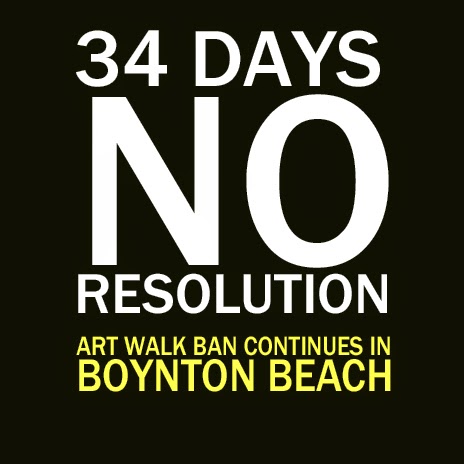 Well into the City of Boynton Beach's 34th Day with out a resoultion to the Ban on the Art District's Art Walk; letter's, comments, reviews and speculations are surfacing.
In print and online, the future of the highly regarded event that established the city as
haven for artists akin to the early days in New York City sits on a balance waiting for the August 1 talks between organizers and city officials.

A letter to the editor of the Sun Sentinel
by Boynton Beach resident Jes Robison says, "As a professional and a resident within this community, I am inspired by the efforts made by the Boynton Beach Arts District to engage the city of Boynton Beach's artistic populace. I believe they should be commended for their initiative and creativity, not to mention the dream they share with the many Boynton residents that believe our city can only benefit by actively promoting an atmosphere of culture and imagination."

The News Times Article:
City of Boynton Beach Shuts Down Popular Monthly BBAD Art Walk
Alex Rendon Says...
"A key to BBAD's success has been its well-staged monthly art walks, which most recently received top honors as New Times' best art walk for Broward and Palm Beach counties.That's why we're scratching our heads at the news that the city decided to shut down this event."
Writer, Alex Rendon ends his article by calling the art walk an "instrumental Palm Beach County institution."

Comments to Sun Sentinel Story by Attiyya Anthony  include:

The City is making up policies that are affecting actual working people's lives. BB Art District is a beacon of culture in a depressed area, and THE source of livelihood for dozens of artists and craftsmen who work and exhibit there. It is a homegrown, organic product of love and hard work, and an AMAZING SUCCESS. City of Boynton- try to resolve this please or something we all need will go away!
Is Boynton Beach suddenly unfriendly to artists? So much has been done to put this little seaside town on the map as super friendly to art, with a strong Art in Public Places effort, annual sculpture trail, EcoArt included in its Green Ordinance, a beautiful new EcoArt project (EcoWalk at Seabourn Cove) and a new Kinetic Art symposium and show once a year. Why would the city now shut down what has been called the Most Successful Art Walk in Palm Beach and Broward Counties?? Let's hope Boynton reconsiders shutting down Rolando Chang Barrero's fun monthly events that generate income for local artists! There should be no ban on art!
Read more.....


Posted by Rolando Chang Barrero at 9:23 AM