SunSentinel Updated Art District Ban Story Online!
But, will it appear in print? 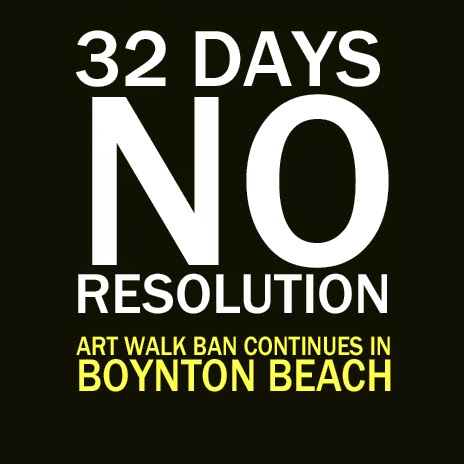 The story which includes a quote by the City Of Boynton Beach to mislead the public
that the organizers did not have proper permits has been clarified.

As soon as the SunSentinel was made aware of the oversite to not include
"The Letter" calling for the BAN OF THE ART WALK, they immediatly
updated the story and included
a paragraph to help claify the misleading quote by the City of Boynton Beach.
"According to a letter sent to Rolando Chang Barrero, arts district director, by Tara Altman with the city's risk management department, "the city has never allowed monthly events as our special event process is only for events that are considered 'temporary.'"
Read Story Online


Will it be corrected in print, we hope so. Yet the attempt to sway the public, and shift reponsibility by the city public relations was made. It was printed, and it has been read.

Proof that you can't hoodwink everyone is in this letter which was sent to the SunSentinel,  I was copied, regarding the article:

"Unfortunately your article on the cancellation of the monthly Art Walks neglected to state that Boynton Beach City Government has no monthly permitting process. The organizers were never at fault by not applying for permits that never existed as this aeticle insinuated. What the Art Walk organizers did was a tremendous amount of work which celebrated artisans and drew people from all over the state and the world to Boynton Beach. What a shame that this is now seen as a crime by the Boynton Beach City Government which would rather shut down these Art Walks and their bebefits for the community rather than celebrate the continuation of the Art Walks until this City can get its paperwork in order."