Local artists get a space to display their work... 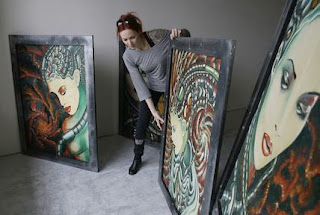 By LONA O'CONNOR-Palm Beach Post Staff Writer/Dec. 8, 2011
BOYNTON BEACH — Subbora Jackson is happy, as well she should be. Several pieces of her art are on display in a shop window at Quantum Town Center on Gateway Boulevard.


Jackson, a graphic artist and painter, is showing off some of her vividly colored, fanciful paintings in her space. In the next shop window is another artist's work, and then another and another, from one end of the shopping center to another.
Quantum Town Center, like many shopping areas, has a number of vacancies because of the super-slow business climate. But the city's Art in Public Places department introduced the idea of putting the display windows to creative use, calling it "Swing Space."
The management of Quantum liked the idea as a way to attract people.
It began with five artists a year ago and now is maxed out at 14, all of whom get six-month runs in the store windows.
"We got so much interest, we added more," said Debbie Coles-Dobay, art administrator for the city. "It helps the artists get their work known and on display."
The artists on display were selected by members of the city's art commission boards.
Some of the artists are from Boynton Beach, including a group from the city's "art street," a collection of studio-work spaces on West Industrial Avenue . The remainder are from other Palm Beach County cities and Broward and Miami-Dade counties.
Subbora and the other artists installing their work in the shop windows on a recent morning became part of the ambience.
As Lea Vendetta carried her paintings to her space, she added a Parisian élan to the proceedings. Not only was she high-booted and tattooed, she happens to have been born in Paris and some of her paintings have a Paris-in-the-1920s feel to them.
Early next year, the art space at Quantum will become part of an "art walk," when people are invited to stroll and enjoy, giving added exposure to the artists.
"The businesses are all excited about it," said Coles-Dobay. "It enlivens the area."
Bobby Jones is happy too. He's the marketing director at Quantum and he likes the positive buzz of Swing Space.
Directly behind Quantum are about 2,000 residents in Quantum Lakes Villas, any of whom may stroll by the art on their way to get an ice cream cone or a pedicure.
Even though it's counterintuitive, lending space to artists seems to be coinciding with the arrival of new tenants. Other than good karma, there's no obvious explanation for this turn of events.
In addition to the Subway, nail salon, day spa, ice cream shop, Greek grocery and others already in the center, Jones says a pharmacy, a coffee shop, a restaurant, a weight-loss clinic and a cigar lounge will open in the next few months.
And the process is working both ways.
Although he has not yet sold any of the paintings in his Quantum display, Rolando Barrero is already benefiting from the city's support of local artists.
"The mayor and the commissioners came to our opening on Nov. 11. We had about 120 people," said Barrero, whose studio is on West Industrial Avenue. "I sold six pieces."