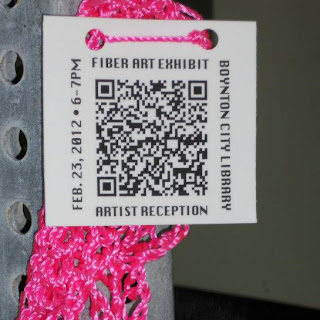 Every once in a while the Art World gets a few new terms that make you go--Umm!
This story has two!
I like it!
Not sure who came up with them, but kudos to the wordsmith!
By Erika Pesantes, Sun Sentinel
Artists in Boynton Beach on Tuesday will adorn lamp posts, bike racks, door handles and even trees with brightly knitted, crocheted and knotted art pieces.
"Unexpected fiber art," which somewhat resembles fringed scarves, will offer passers-by something to smile about, lead artist Lori-Nan Kaye says. But it may also leave them scratching their heads.
Cue in tags attached to the art with QR codes that may be scanned with a smartphone and offer information about the current fiber art exhibit at the city library. "Unexpected fiber art" is being used to promote the exhibit, featuring 21 local artists' textile works through May 31.

The randomly placed art also brings attention to "yarn bombing," a form of street art that uses yarn and anonymity to bring warmth to sterile places. It doesn't have the permanence of graffiti, but police could consider it vandalism; some also call the fuzzy art "grandma graffiti."
Even though artists in Boynton Beach will remain largely anonymous, their version of yarn bombing or "unexpected fiber art," as they prefer to call it, is endorsed by the city, said Boynton Beach's public art administrator Debby Coles-Dobay.
"Originally, people would dress up as ninjas and do it in the dead of night. It's really cool and funny, but we're sort of past it. It's worthy of attention in its own right," Kaye said, "So, my theory is, since you're going to pay attention to it anyway, I don't think it has to have those violent connotations" given by the word "bombing" in "yarn bombing."
Artists plan to target Ocean Avenue, also dubbed "Avenue of the Arts," in the downtown area as well as businesses that have given permission for the art to "unexpectedly" pop up on their properties. On the list so far: a bank, a pharmacy, a fish market and, naturally, a local art gallery.
The public is encouraged to search for the few dozen pieces of fiber art, snap photos of it and chat about their scavenger-like adventures during an artists' reception Feb. 23.
The art is made from nylon cording, rope, lanyards and yarns in rainbow hues and neon colors. Some are flower-shaped or fringed; others look like spider webs or fish nets.
epesantes@tribune.com or 561-243-6602 or Twitter @epesantes


For More information visit
ActivistArtistA.com
Posted by Rolando Chang Barrero at 6:48 AM