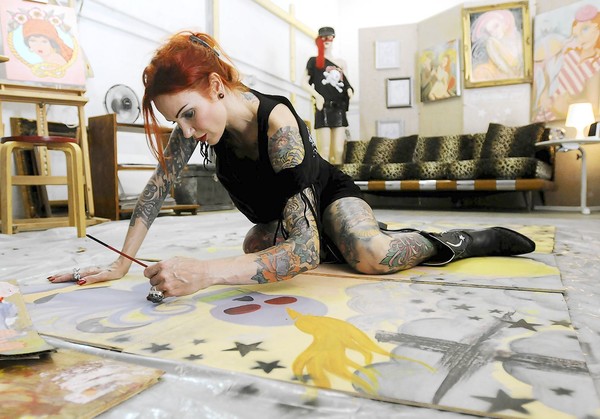 FPG Photo/Kimberli DiMare 12/23/11 MISTRESS OF INK. Lea Vendetta is an accomplished tattoo artist currently working at "A Stroke of Genius" in Boca Raton and one of twelve contestants on "Ink Master," the first tattoo competition reality show, premiering January 17 at 10 p.m. on Spike TV. Vendetta is also a painter in The District, the new neighborhood art district in Boynton Beach. (***EDITOR'S NOTE: Lea did not want her age and the town she lives in. She gave permission to say she worked in Boca Raton as tattoo artist and in Boynton Beach as a painter.***) (Kimberli DiMare, FPG / December 29, 2011)

Lea Vendetta has taken career multitasking to a new level.
The Boynton Beach artist is not only one of the fresh faces in the bustling art district along West Industrial Avenue but she also works in Boca Raton as a tattoo artist and is one of the stars of the new Spike TV show "Ink Master."
The show premieres 10 p.m. Jan. 17, bringing some celebrity limelight to Boynton Beach. Vendetta, who was born in France and moved here in the mid-1990s, said she has been painting since she was a little girl.
"I was always one of those creative children," she said.
Vendetta started tattooing on herself and owned a shop in Boca Raton until 2007, when she sold it to travel and tattoo the world. Then, she moved to Key West after tattooing was legalized on the island a few years ago.
"My tattoo station was right near the window," she said. "That was super fun, then I decided to come back to the mainland."
She began modeling, then tattooing at A Stroke of Genius Tattoos in Boca Raton. Vendetta has been published in magazines for about 20 years and she said that helped prepare her for what came next.

She began modeling, then tattooing at A Stroke of Genius Tattoos in Boca Raton. Vendetta has been published in magazines for about 20 years and she said that helped prepare her for what came next.
"I got this phone call from these TV people and they were like, 'We need you, you are perfect for this show,'" she said of Spike TV recruiting her. "It was 10 contestants living in this house together and videotaped."
Even with a final prize of $100,000, Vendetta said he first reaction was to say no.
"Then I talked to some friends and they said I was crazy not to do it, especially without casting," she said. "So, I signed up for this crazy adventure and went to New York City. The rules were we would first have a challenge, tattoo related, but not necessarily involve tattooing. Then if you win the first challenge, you get an advantage for the tattoo competition. You are able to pick your clients, which is a huge deal."
She said different themes like the history of tattooing were interlaced throughout the competition.
"The first day we met, we went to a meat locker in New York City and had to tattoo dead pigs," she said.
Dave Navarro of the rock group Jane's Addiction is the host of the show with Chris Nunez from "Miami Ink" and tattoo artist Oliver Peck as the judges.
Even with all this hoopla about to take over her life with the show's premiere in a few weeks, Vendetta said she is just happy to be a part of a community in her new art studio at 410 W Industrial Ave. in Boynton Beach.
"It's alive; it's a community and I am so excited about that," she said. "I have always been looking for something like that. We're going to have an art show on Jan. 26 and have a DJ outside with a cool music vibe."
Debby Coles-Dobay, the city's public art administrator, said Vendetta's art evinces her tattoo background mixed with her French past.
"She has mixed media and paintings," she said. "I see in her work, a French Parisian influence. She is also a model and a very determined young woman."
Coles-Dobay said the most exciting part of the art district is the variety of personalities permeating throughout it.
"It matches the diversity of our city," she said. "There is a list of artists waiting that want to move in here."
She said that the show on Spike TV is not bad for the city either.
"It puts Boynton on the map," she said. "Now, when artists start to come in, it improves the aesthetics as well as the businesses."
Coles-Dobay said artists Rick Beau Lieu and Rolando Barrero could be credited with bringing in the new talent to the district.
Visit Leaslounge.com or Spike.com/shows/ink-master.
Copyright © 2012, South Florida Sun-Sentinel


For More information visit ActivistArtistA
Posted by Rolando Chang Barrero at 7:57 AM