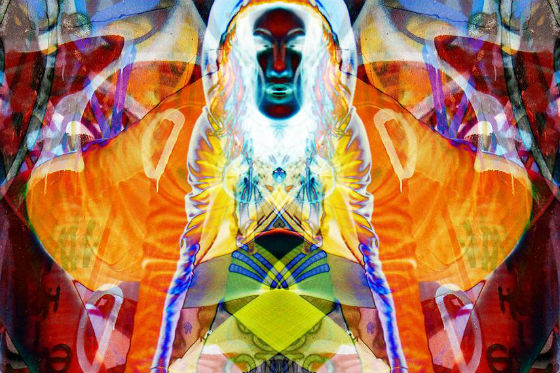 Valyn Calhoun's camera is his therapist, he says. And one need only look at his photographs to see what he means.
An often jarring assortment of random limbs soaked in bright, harsh colors, his photos can feel discomforting at times, like a bondage, big-top circus. Combating the chaos, ostensibly at least, is his incorporation of a mirroring technique, which creates a symmetry in his work: a sort of kaleidoscape.
But trying to rationalize his pieces defeats the purpose. The discordance is his point.
See also: Valyn Calhoun's "Retrospective": Young Photographer With HIV Comes Alive Again


Calhoun, a 30-year-old Fort Lauderdale native, points to sexual abuse he suffered as a child and the subsequent emotional struggle as the inspiration behind his images. A self-defined sex addict, he wants to convey the complete loss of control and loss of rationality that goes with such a condition. Calhoun is gay, but his photos show genderless bodies, demonstrating that under such an addiction an arm is a leg is a mouth is a whatever; it doesn't matter. "You can't tell who's what in the throes of a sex addiction," he says.
The past year has seen some highs and lows for Calhoun. His health spiraled out of control until he was finally diagnosed as HIV positive, for which he was promptly treated. As a result, his health improved quickly and drastically.
"My brain hasn't caught up yet," he says. "Within three months, I had gained 20 pounds back, and within six months, I'm undetectable. The meds are amazing and my body is healthier. Mainly, it's been a struggle of the mind and reconciling what just happened with me, and finding my artistic spark again because I felt dry. But when it comes to the physical part, I'm blessed, I couldn't be any luckier."
Now Calhoun is creating again, his camera right beside him, certainly helping his brain catch up one inspiration at a time.
Check out our interview with Calhoun below for his upcoming retrospective, opening Thursday, August 22 at ActivistArtistA Gallery in Boynton Beach. The reception is Saturday August 24. Details below.
New Times: What can we expect from this show?
Calhoun: Basically Rolando [Barrero] contacted me about this show. He wanted to put together a retrospective previewing and showcasing my work from the past, so basically what's going to be on display is all my photography since I started my career. I'm selecting pieces from each of my series to display on separate panels. And it's a big range: from 8x10 up to 13x19 I think is my largest print. The whole front of the gallery is going to be chronologically ordered with my series, and the back of the gallery is going to have about four or five images of me by Rita Baum, so I'll be the subject for the background, too.
Who is Rita Baum and why did you partner with her?
Rita Baum is a very good friend of mine and a great artist. She is the first person that I shot as a model professionally. [Because] she was my first model, I thought it would be really interesting for this show. She's never shown at a gallery before, and she started doing some artwork of her own after modeling, and she ended up taking some really phenomenal pictures of me. So I asked her if she wouldn't mind participating. So it's kind of like, I started with her as my model and now here we are three years later and she's putting up pictures of me at my show. It's great!
Do you feel Florida influences your work and/or creative process? Do you see Florida in your work?
I blame the Bermuda Triangle! It brings me back here every time I leave. But yes, the weirder parts of Florida particularly. When I was growing up down here I knew I was gay right from the get go. Some things happened to me in childhood, in preschool molestation-wise that definitely left an impact on my head. The guy was acquitted so I can't even say his name in press or anything because he got away with it. And that's been the main inspiration for the beginning for my artwork. Not even realizing at the time I had repressed memories and all this sexual addiction. All this sexual energy was definitely pouring out through my art and screaming and when all these repressed memories came back I found myself having to find a new muse and new medium and a new inspiration. I definitely find inspiration in the characters in Florida, the local people you see, the local flora and fauna. I can't help it but everything about here led up to the person I am today.
There's a lot of nudity in your work, but also a lot of distortion. What's the purpose of this, what are you trying to express?
A lot of people do notice the distortion or kaleidoscope aspect or a mirroring aspect in my work. That started with the "Meat" series which was a self-exploration in my sex addiction. Basically what I was trying to capture with that original series was the throes of a sex addiction, when you're so far deep into the compulsive process that you can't tell whether you're having sex with an arm, a leg, or an ass, or a woman, or a man. I wanted to bring that to people's eyes. Something about the sex act for me while I was going through this transformative process was very compulsory and lost all sense of anything visible, so I wanted to portray that through my art: how the human mind can twist up the human body. My models for the "Meat" series were male and female, but you can't tell who's who, what's what, what you're looking at, and that's kind of what it feels like when you're in the throes of a sex addiction.

[The "Meat" series was] where I really started exploring. It was when I started getting my repressed memories back really heavily, and I started realizing that I wasn't born with my sex addiction. It was something that was inflicted upon me and I hadn't realized that. So part of that process for me was getting it out onto paper for others to see. It's always really interesting to hear what other people come up with and what they see when they look at the art knowing none of the backstory because usually it's pretty dead on.
What's next for you?
A few things are on the back burner right now. I've actually been really working on getting my photos off of paper. I'm working on different types of fashion. I'm really trying to get my photography off the wall, off the paper, and on to people, on to buildings, on to other things, and that does include the potential of opening a gallery. There's some of that talk in the works, too.
What besides your camera, has helped you through some of the bad times?
Honestly I'd really like to thank the entire freaking art community. I know how cheesy that kinda sounds. Except when I was really sick and in the hospital, people were going out of their way. I was getting at least 10 phones calls and texts every single day not including emails from people I had never met before that were donating to my fundraiser, sending me positive vibes. I really attribute my will to get better so fast to that. I changed a lot of habits in my life when I got sick. I really attribute that to the amount of people who responded in such a loving way. Surprisingly, it didn't come from the gay community, it came from the art community. And that I'm most thankful for, because these are the people who buy my art and are allowing me to be an artist again.
Valyn Calhoun with Rita Baum, Thursday, August 22 during art walk at ActivistArtistA Gallery (422 West Industrial Ave., Boynton Beach). The reception will be held August 24, from 7-10 p.m. Other entertainment includes Dooms de Pop, WolfCat, and Beat Thief.