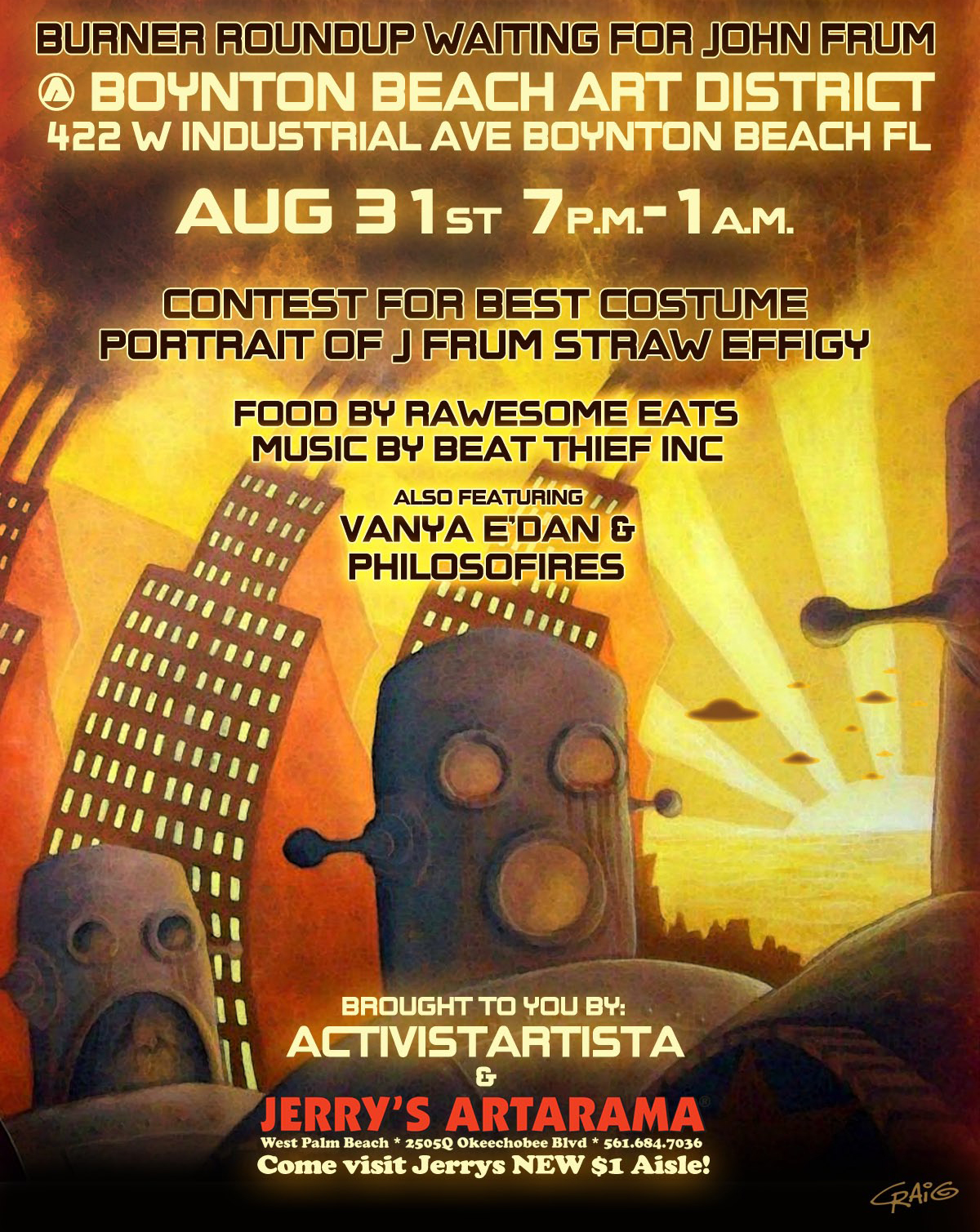 Rolando Chang Barrero, the inspired eccentric and mastermind of ActivistArtistA -- the gallery at the heart of the Boynton Beach Art District -- had a great idea. Some time ago, he got in touch with organizers of Burning Man, the annual alternative festival/freak show/transitory community in the Nevada desert, and arranged for a live feed of events there to be shown at a companion party in the warehouses of Barrero's Boynton Beach artists' enclave.

That part of his plan for tomorrow night's gathering has gone up in smoke, like a parody of the famous desert festival's iconic concluding act. Barrero says higher-ups in Burning Man's corporate structure sicced their lawyers on him, raised questions about copyright and put the kibosh on his plan. (Burning Man's come a long way, for better or worse, since its DIY founding days.)


Barrero's bowing out gracefully. "I decided not to fight it," he told New Times. "My whole thing is about community." He could have done a bootleg feed, he said, but "I didn't want the District to reflect that lack of principle."
The show must go on, however, and it will, Barrero being a cat who rolls with the punches. Still on tap for the Saturday event are all other aspects of the event he planned: Fire pits (all in accord with the directions of the Boynton Beach Fire Department), DJ Professor Chaoz (Daniel Wander) of Beat Thief, Inc. ("Drop bass, not bombs"), bellydancing and more by the Vanya~E'dan Dance & Entertainment Company, avant-garde hula hoopery byPhilosifires, Rat's Mouth playing tunes, and, inevitably, drum circles.
Vestiges of the original, proposed Burning Man connection remain. The party's headline is "Waiting for John Frum," a reference to the cargo cult avatar which also serves as theme of this year's Burning Man. As a result, a costume and effigy contest along those lines is still a possibility. "If people show up and make it happen," Barrero told us, "we'll do it." Which pretty much sums up the ActivistArtistA philosophy.
Waiting for John Frum. 7 p.m. to 1 a.m., Saturday, August 31, Boynton Beach Art District,
422 West Industrial Ave, Boynton Beach.

Posted by Rolando Chang Barrero at 7:51 AM