Join us for the closing reception of Dwelling Projects: Paper Plane Exhibition! This Thursday..... 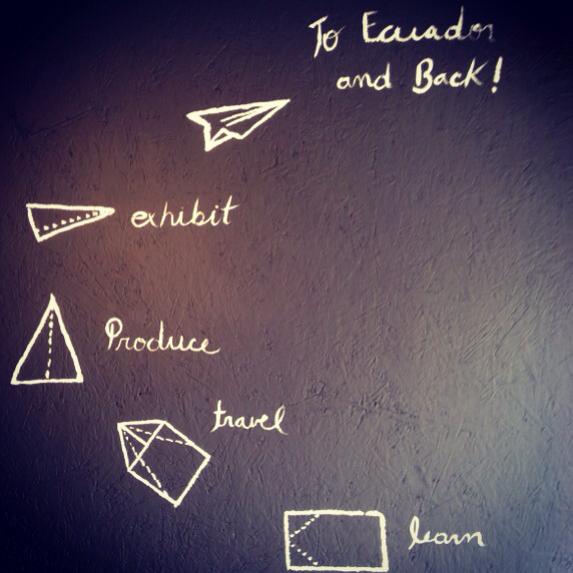 Bon Voage and Best of Luck!

BY LONA O'CONNOR - PALM BEACH POST STAFF WRITER
Nathalie Alfonso and Sofia Bastidas were looking for a solution to the isolation they experienced as young artists. First they turned their Plantation house into a gallery, painting the interior walls white, adding display lights and removing the furniture. They invited small groups of artists to show their work, sometimes for the first time ever.
But they also think big. After three “house” exhibitions, they took a trip to Puerto Rico, where they found artists banding together in small collectives for mutual encouragement and inspiration.
“It was interesting to see how they take the art to another level,” said Alfonso. “The only way to do is was as a group.”
They decided to start an artists’ exchange program, which they are calling “Dwelling Projects.”
Bastidas is from Guayaquil, Ecuador, and has contacts there. An Ecuadoran art collective offered to put them up for a month, where they will produce art, mingle with artists and, on returning to Florida, put on a show of work from the trip.
To raise the money they needed, they opened a page on Kickstarter, a crowd-funding site that allows people like them to pitch an idea to viewers who can donate any amount. So far they have received pledges for $3,700 of the $5,000 they need to send them and two other artists to Ecuador. For donors of larger amounts, they are offering wedding and pet photo shoots, original art and even a dinner party.
Through the local art grapevine, they were introduced to Rolando Chang Barrero, who runs ActivistArtistA, a gallery and performance venue. Since he became the unofficial mayor and indefatigable impresario of Boynton Beach’s small arts district about three years ago, the short strip of storage-unit studios has turned into a bustling hub of arts, culture tours, exhibits and performances.
Barrero offered them studio space for a week. On Saturday, they will have a fundraiser to close the financial gap on their trip. Local artists have donated dozens of photos, prints and other art objects, the proceeds of which will help pay for the trip. The two women and several of their associates have also silk-screened T-shirts with edgy line drawings to commemorate the project.
The show opens at 7 p.m. tonight. Artists will be working at ActivistArtistA, 422 W. Industrial Ave., through May 24. The exhibition’s closing reception will be at 6 p.m. May 23.
For information, call 786-521-1199.
A blog describing “Dwelling Projects” is at http://dwellingprojects.tumblr.com/
Posted by Rolando Chang Barrero at 8:22 AM