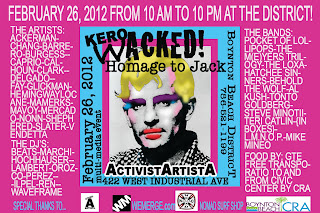 Our Friends at GigMagFL.com have this to say!

Please visit their site frequently for the best info on current and upcoming events!
Gig Mag


Whats Hot In The Sunshine State!

Whats Hot In The Sunshine State!

Smell Check! Stinky Grooves and Glistening Jams! You Know Its Gonna Get Stinky, So Lets Get On With the Show! Lets Go!

The Ride Back Bike Fest 2012 Features The Tampa Bay Motion Picture Premiere Easy Rider: The Ride Back at The 1-800-ASK-GARY Amphitheatre in Tampa on Saturday February 25th! Tickets on Sale Wednesday February 1st at 10 am.!

Read Jack Kerouac's Epic Book "On The Road" and then "The Subterreaneans"!

The 54th Annual Grammy Awards Is February 12th at the Staples Center in Los Angeles and Aired Globally on CBS at 8 pm. The Pink Floyd Experience Rocks The Phillips Center in Gainesville on February 29th, The King Center PAC in Melbourne on March 1st, The Van Wezel PAC in Sarasota on March 2nd and The Dreyfoos Hall at The Kravis Center in West Palm Beach on March 4th! Whats Hot in Florida & Beyond!