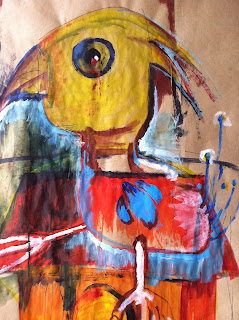 A flourishing neighborhood of artists is quietly located within the city of Boynton Beach.
Most residents are not privy to the existence of the Neighborhood Arts District and its newest member, the ActivistArtistA Gallery, 422 W. Industrial Ave.
Owner and artist Rolando Barrero is having fun with the opening date, launching his gallery at 6 p.m. Nov. 11 or 11-11-11. The art of Kim Fay and Robert Catapano has been selected by Barrero to be shown for the grand opening.
“Kim has a particular vision,” he said. “She has traveled quite a bit and some pieces are more personal to her.”
Catapano does multimedia art but both use the abstract technique and vivid colors, Barrero said.
“Also, the departure from one artist to the other is so amazing; they are the same genre, but both very different,” he said.
The Arts District was established in 1986 by Richard Beau Lieu, who also has his gallery and studio located there.
Other artists have followed suit over the years.
But Barrero is no dilettante in the art field.
“I came from Chicago, where I went to school at the Art Institute,” he said. “Chicago has a lot of areas where little enclave of artists reside.”
New York and a gallery on Lincoln Road in Miami are other stops where “Roly,” as his friends call him, made his mark, including changing the usual way galleries have art openings by stripping them down to just the art and its fans.
“We take away the booze, take away the furniture and have a casual environment,” he said. “It is a family outing place where an intellectual can mingle with a beach bum.”
Barrero has been making art since he was 16, giving him three decades to hone his craft.
As for the name ActivistArtistA Gallery, he said it is just something he has been using since he was young.
“I was originally doing a lot of activist art for a number of different political groups during the AIDS crisis,” he said.
Debby Coles-Dobay, the city’s public art administrator, said the Arts District already has seven artists and more moving in.
“It was an industrial area before and wasn’t kept up real well with a lot of crime,” she said. “Rick and others cleaned it up and put art on the street. Crime lowered because of this.”
She said “Roly” brings a new energy to the area, having a following not just from Boynton Beach but also from all of South Florida.
“His art is more edgy,” Coles-Dobay said. “Now we are getting a great mix of different types of art in this district.”
For information about the ActivistArtistA Gallery, call 786-521-1199.
Posted by Staff Writer on October 21, 2011 9:16 AM
Posted by Rolando Chang Barrero at 9:23 AM