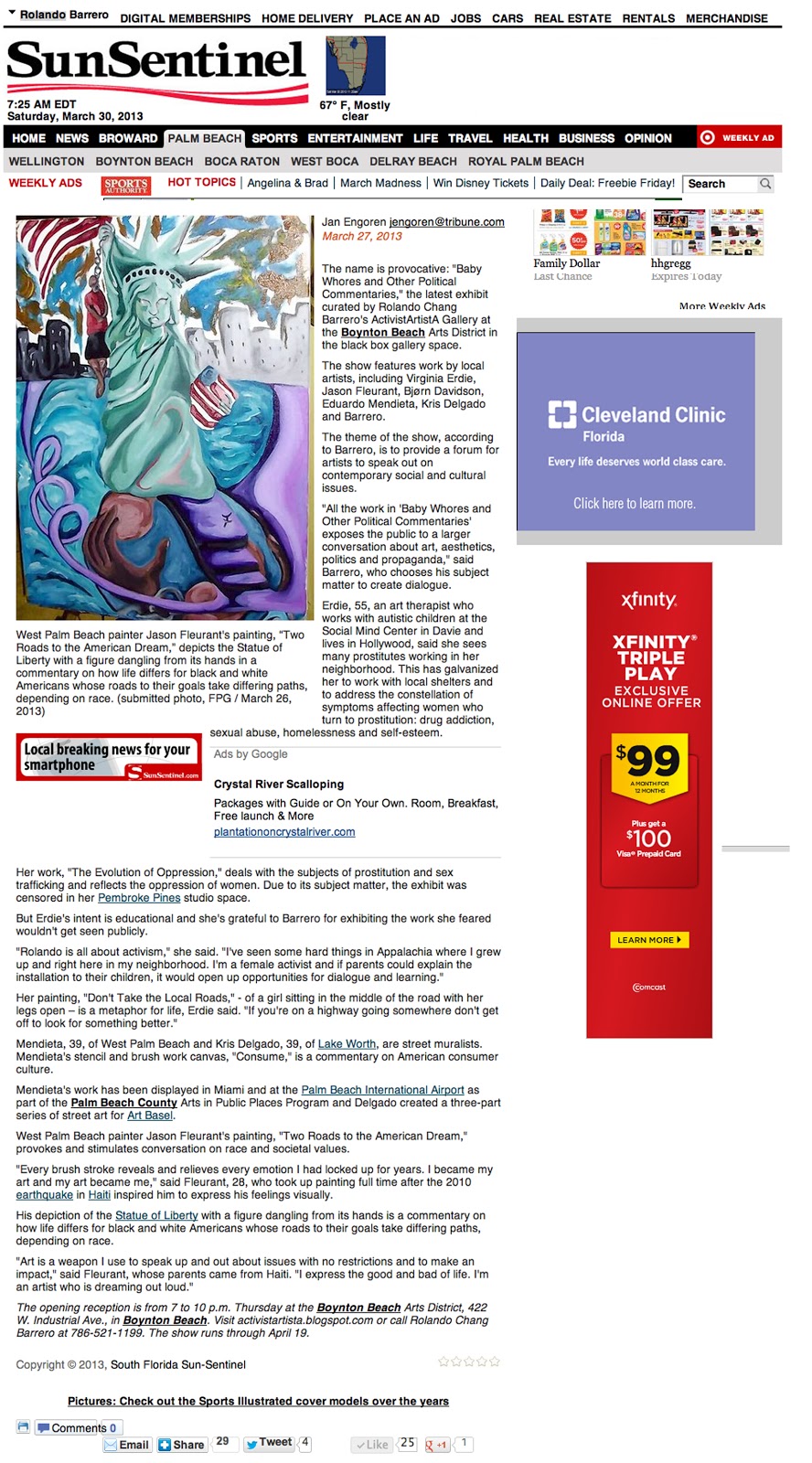 
The name is provocative: "Baby Whores and Other Political Commentaries," the latest exhibit curated by Rolando Chang Barrero's ActivistArtistA Gallery at the Boynton Beach Arts District in the black box gallery space.
The show features work by local artists, including Virginia Erdie, Jason Fleurant, Bjørn Davidson, Eduardo Mendieta, Kris Delgado and Barrero.
The theme of the show, according to Barrero, is to provide a forum for artists to speak out on contemporary social and cultural issues.
"All the work in 'Baby Whores and Other Political Commentaries' exposes the public to a larger conversation about art, aesthetics, politics and propaganda," said Barrero, who chooses his subject matter to create dialogue.
Erdie, 55, an art therapist who works with autistic children at the Social Mind Center in Davie and lives in Hollywood, said she sees many prostitutes working in her neighborhood. This has galvanized her to work with local shelters and to address the constellation of symptoms affecting women who turn to prostitution: drug addiction, sexual abuse, homelessness and self-esteem.
Her work, "The Evolution of Oppression," deals with the subjects of prostitution and sex trafficking and reflects the oppression of women. Due to its subject matter, the exhibit was censored in her Pembroke Pines studio space.
But Erdie's intent is educational and she's grateful to Barrero for exhibiting the work she feared wouldn't get seen publicly.
"Rolando is all about activism," she said. "I've seen some hard things in Appalachia where I grew up and right here in my neighborhood. I'm a female activist and if parents could explain the installation to their children, it would open up opportunities for dialogue and learning."
Her painting, "Don't Take the Local Roads," - of a girl sitting in the middle of the road with her legs open – is a metaphor for life, Erdie said. "If you're on a highway going somewhere don't get off to look for something better."
Mendieta, 39, of West Palm Beach and Kris Delgado, 39, of Lake Worth, are street muralists. Mendieta's stencil and brush work canvas, "Consume," is a commentary on American consumer culture.
Mendieta's work has been displayed in Miami and at the Palm Beach International Airport as part of the Palm Beach County Arts in Public Places Program and Delgado created a three-part series of street art for Art Basel.
West Palm Beach painter Jason Fleurant's painting, "Two Roads to the American Dream," provokes and stimulates conversation on race and societal values.
"Every brush stroke reveals and relieves every emotion I had locked up for years. I became my art and my art became me," said Fleurant, 28, who took up painting full time after the 2010earthquake in Haiti inspired him to express his feelings visually.
His depiction of the Statue of Liberty with a figure dangling from its hands is a commentary on how life differs for black and white Americans whose roads to their goals take differing paths, depending on race.
"Art is a weapon I use to speak up and out about issues with no restrictions and to make an impact," said Fleurant, whose parents came from Haiti. "I express the good and bad of life. I'm an artist who is dreaming out loud."
The opening reception is from 7 to 10 p.m. Thursday at the Boynton Beach Arts District, 422 W. Industrial Ave., in Boynton Beach. Visit activistartista.blogspot.com or call Rolando Chang Barrero at 786-521-1199. The show runs through April 19.
Copyright © 2013, South Florida Sun-Sentinel
Posted by Rolando Chang Barrero at 6:50 AM