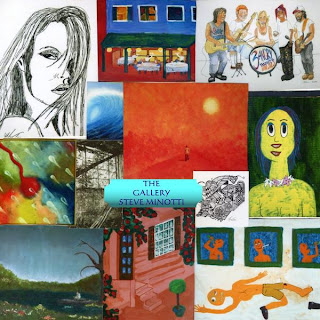 This is Sneak Preview # 8

Minotti was born in Bridgeport, Connecticut on July 28,1958 about the same time that a good era in music was born. Buddy Holly and Elvis brought Rock & Roll to
main stream America. The Beatles and the British invasion, Barry Gordy's Motown, Bob Dylan's folk style, C,S,N,Y's Woodstock Generation, and  Jackson Browne's L.A.sound, are where his roots come from. Singing ever since he could remember, he started playing guitar at the age of 15. Growing up he watched his brothers A.J. & Kenny play all over the South Florida music scene, so he learned pretty quickly. Played his first bar gig when he was 17 and once he got a taste-well,"that's all she wrote", he was hooked. He knew that's what he wanted to do for the rest of his life. So, that's what he's done,
...and done it very well!

Steve Minotti joins a great line up of musicians who will be performing at the
12 hour music and art marathon at
ActivistArtistA's KeroWACKED!

Kevro's ART BAR
Thank you Kevin & Deb for all you do!

"Virtue in a Pocket"
Founded and Directed by Andrea Michelle Ible

City of Boynton Beach
Read about The District

This is Sneak Preview number 8 of music that will experienced at
ActivistArtistA Gallery located at
"Palm Beach County's Arts District" in
Boynton Beach, Florida